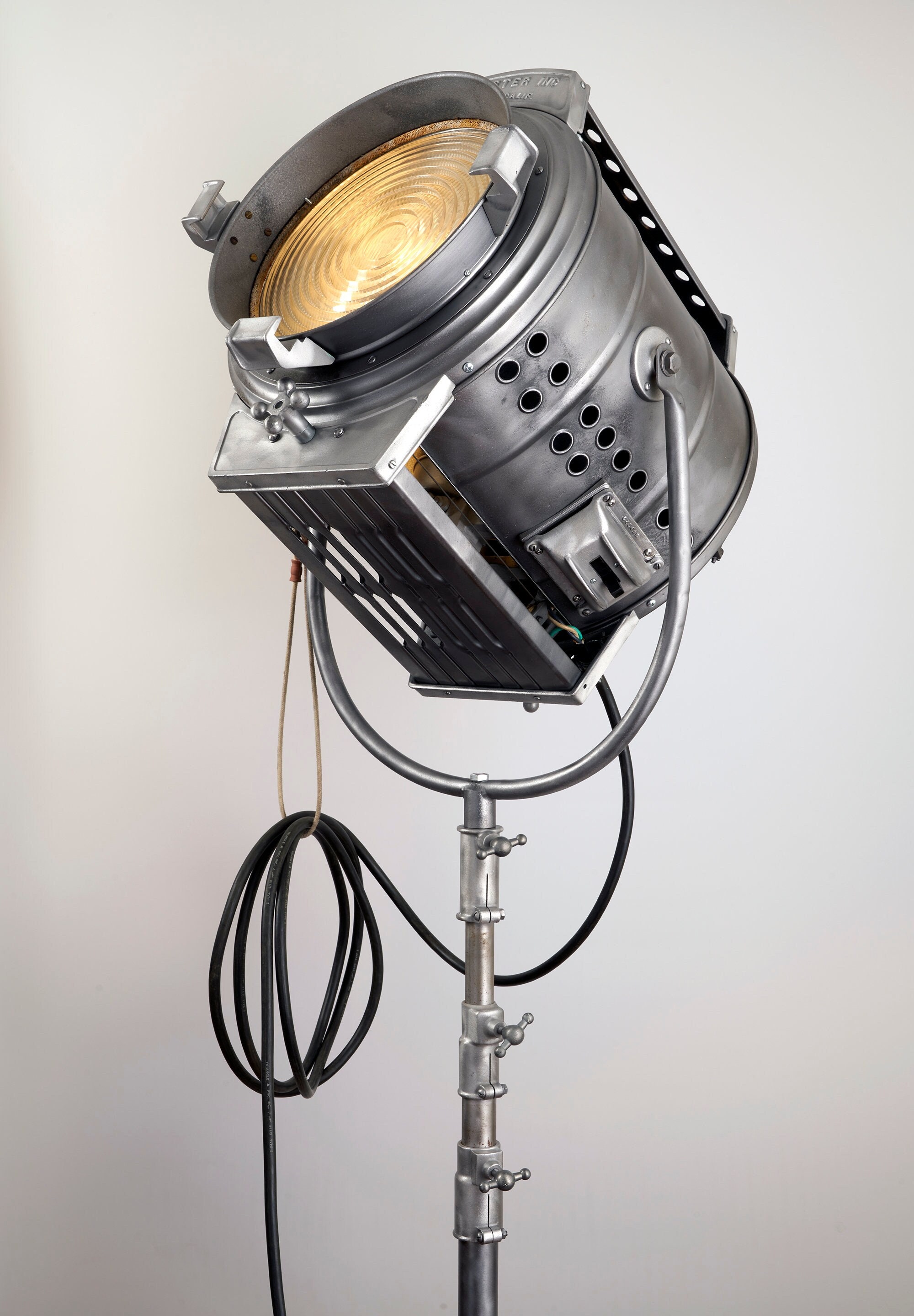 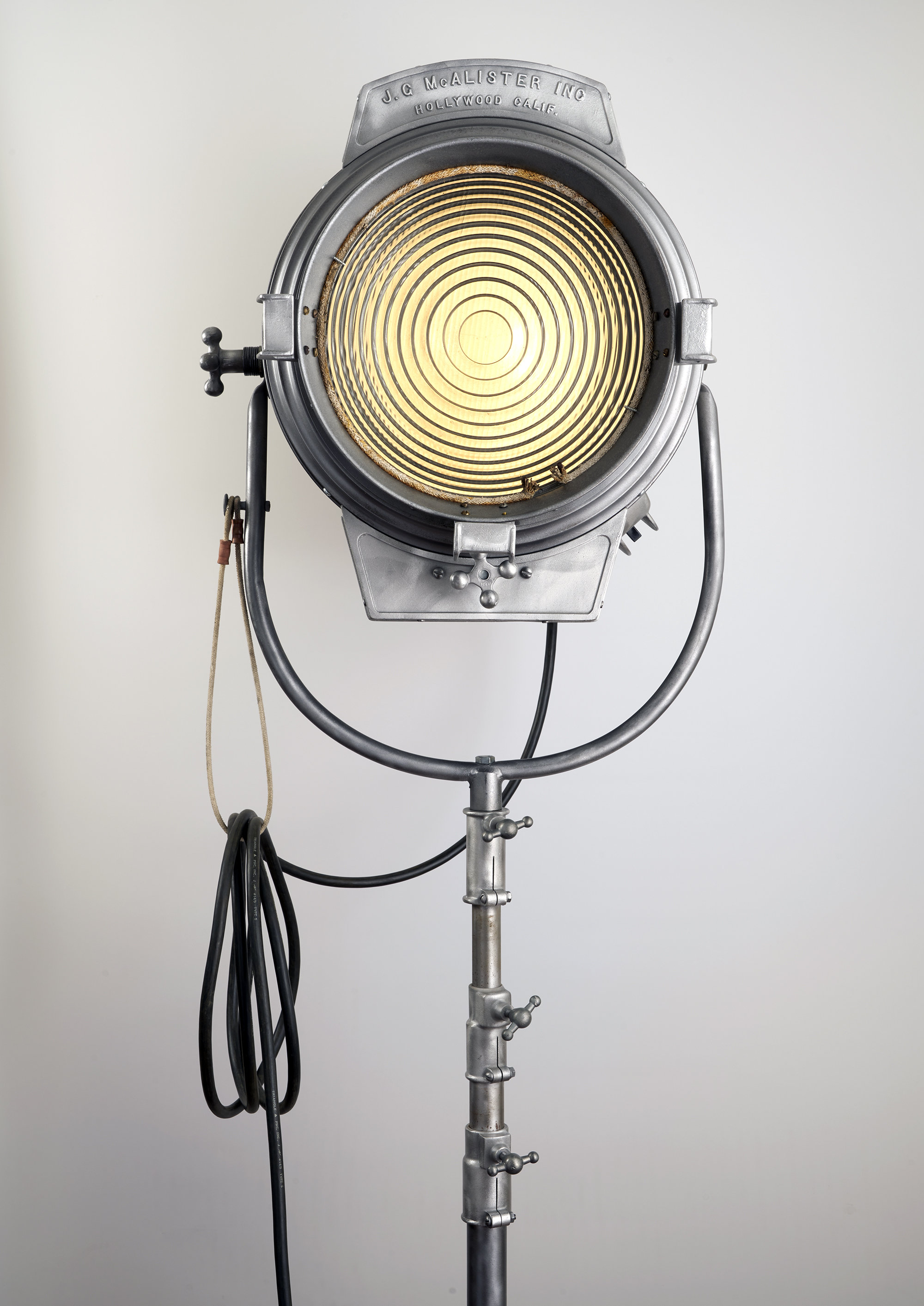 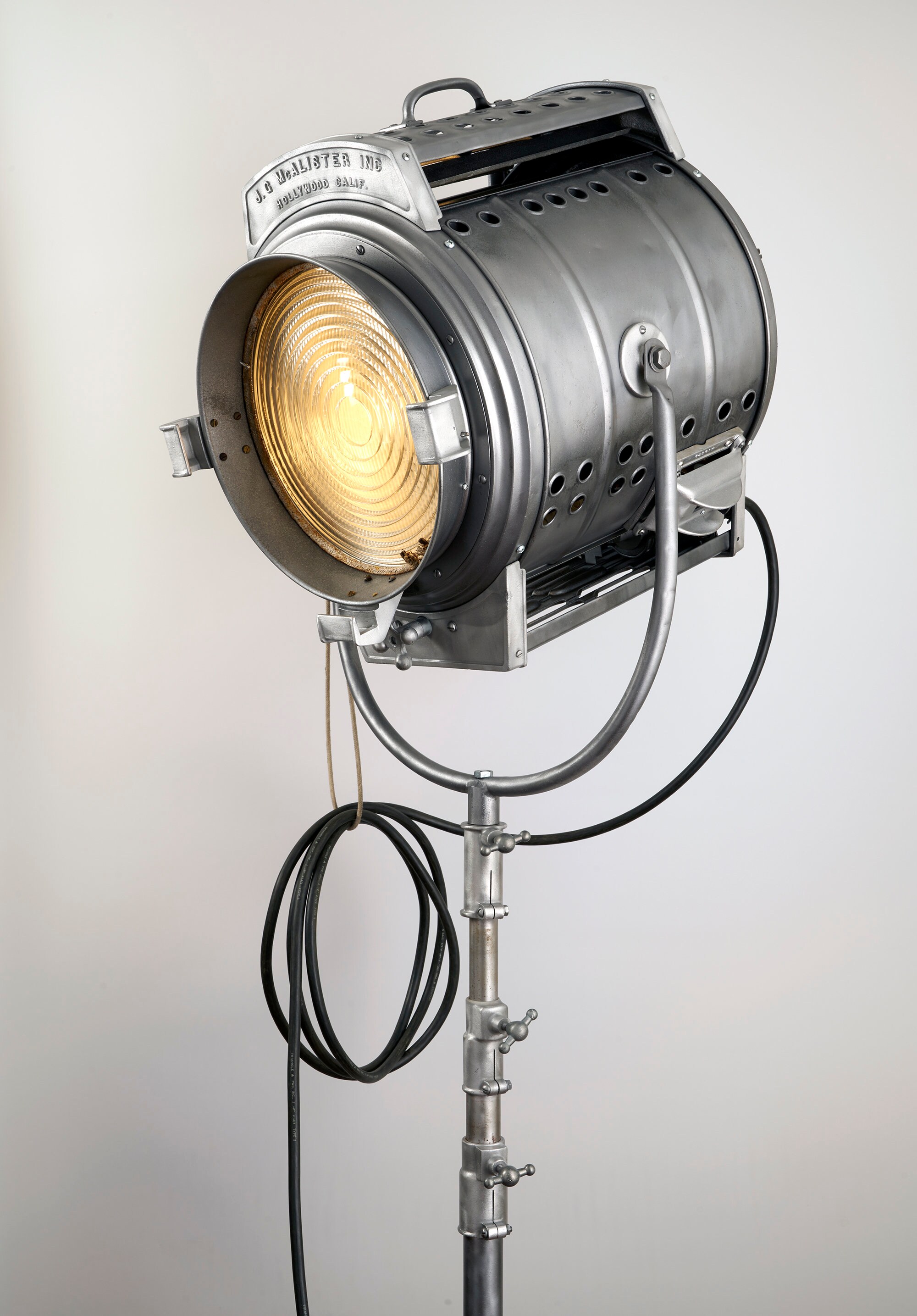 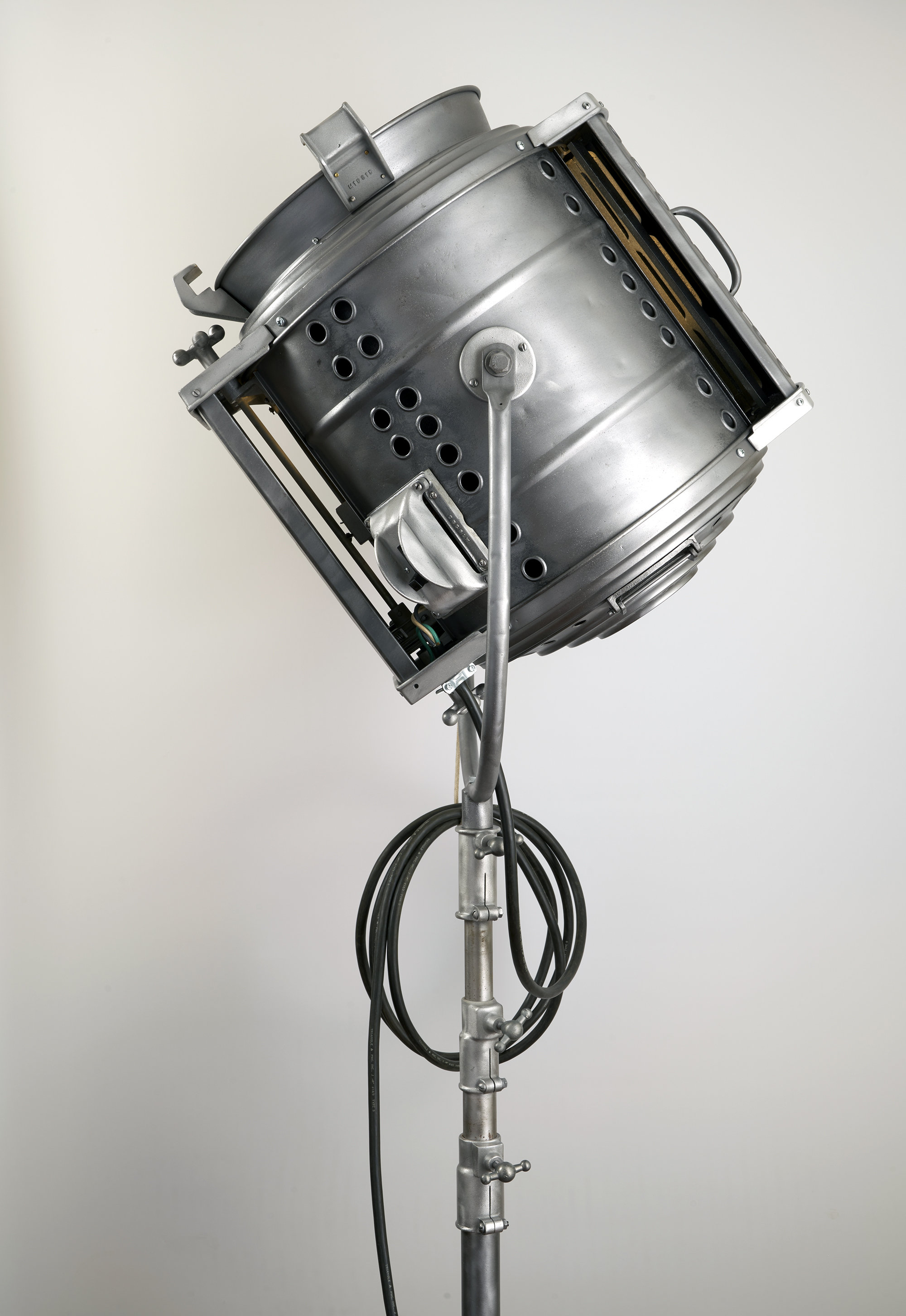 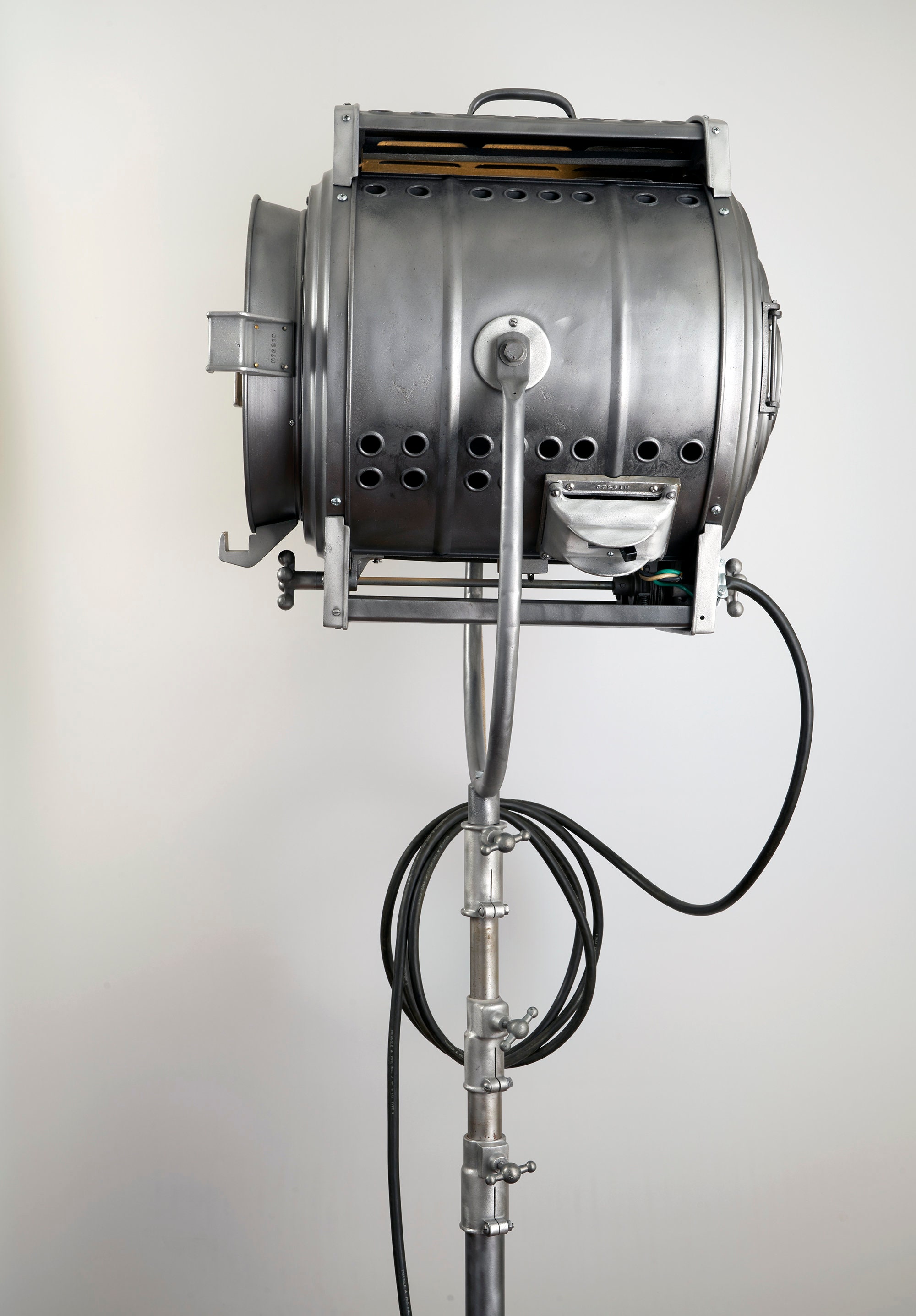 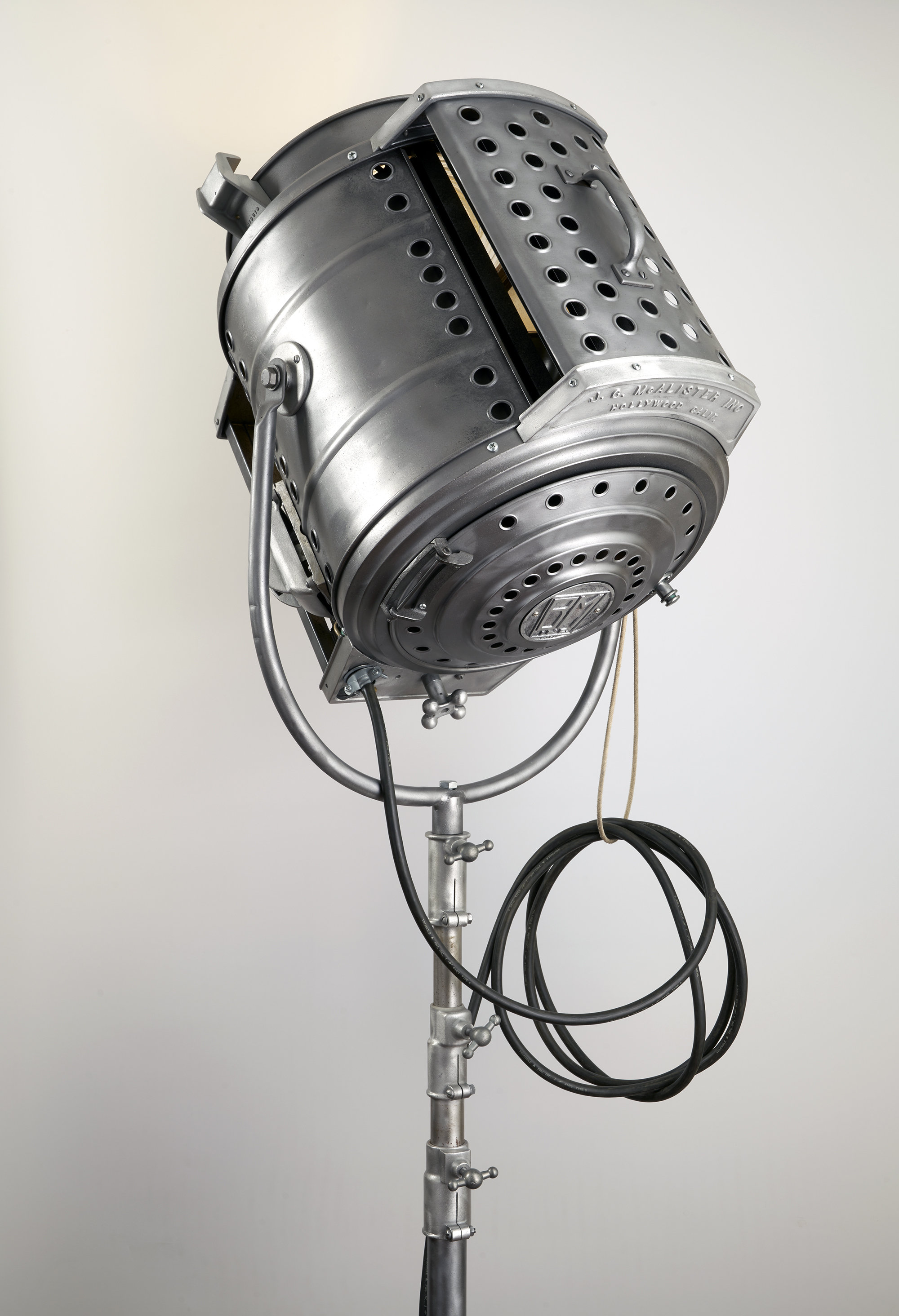 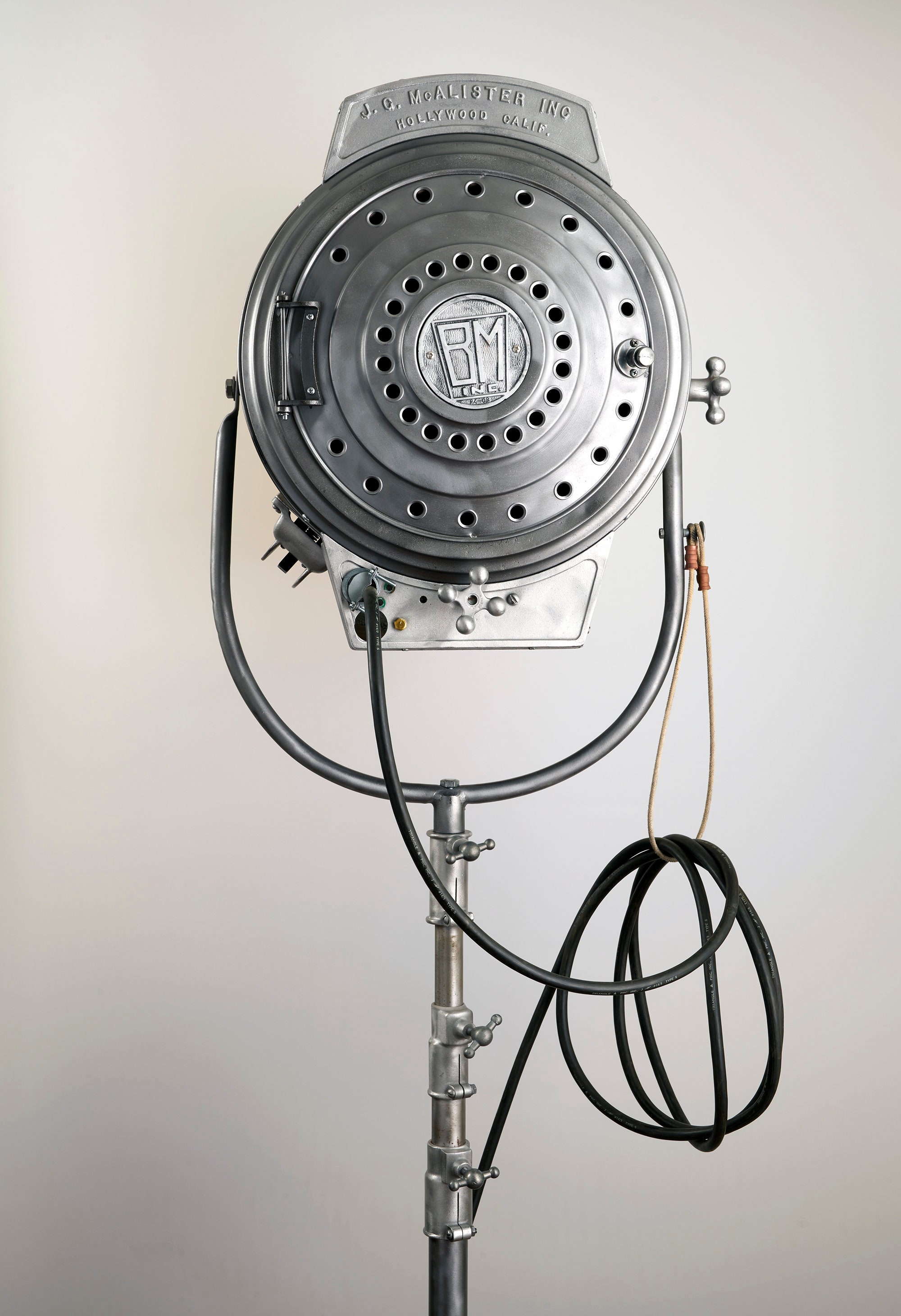 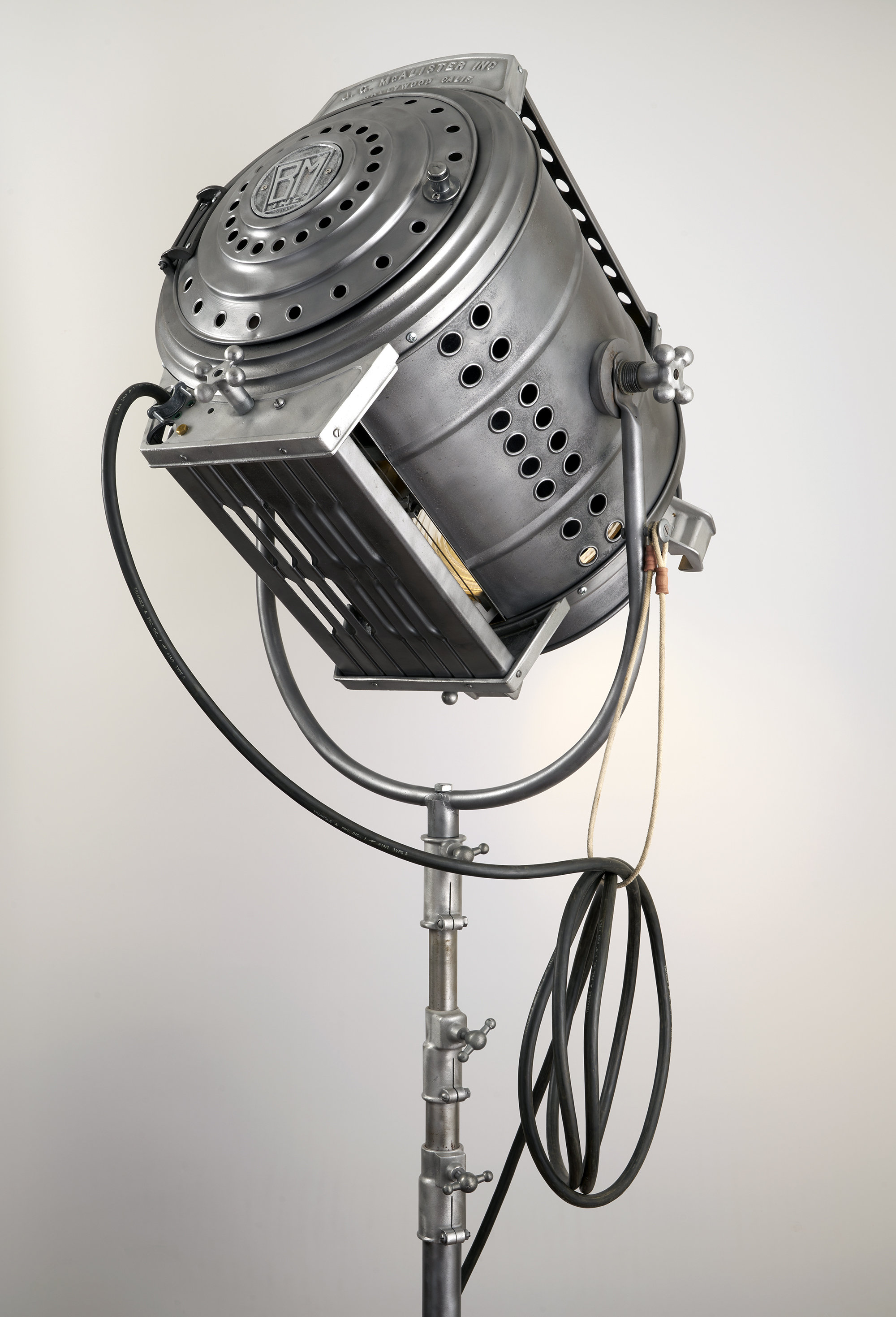 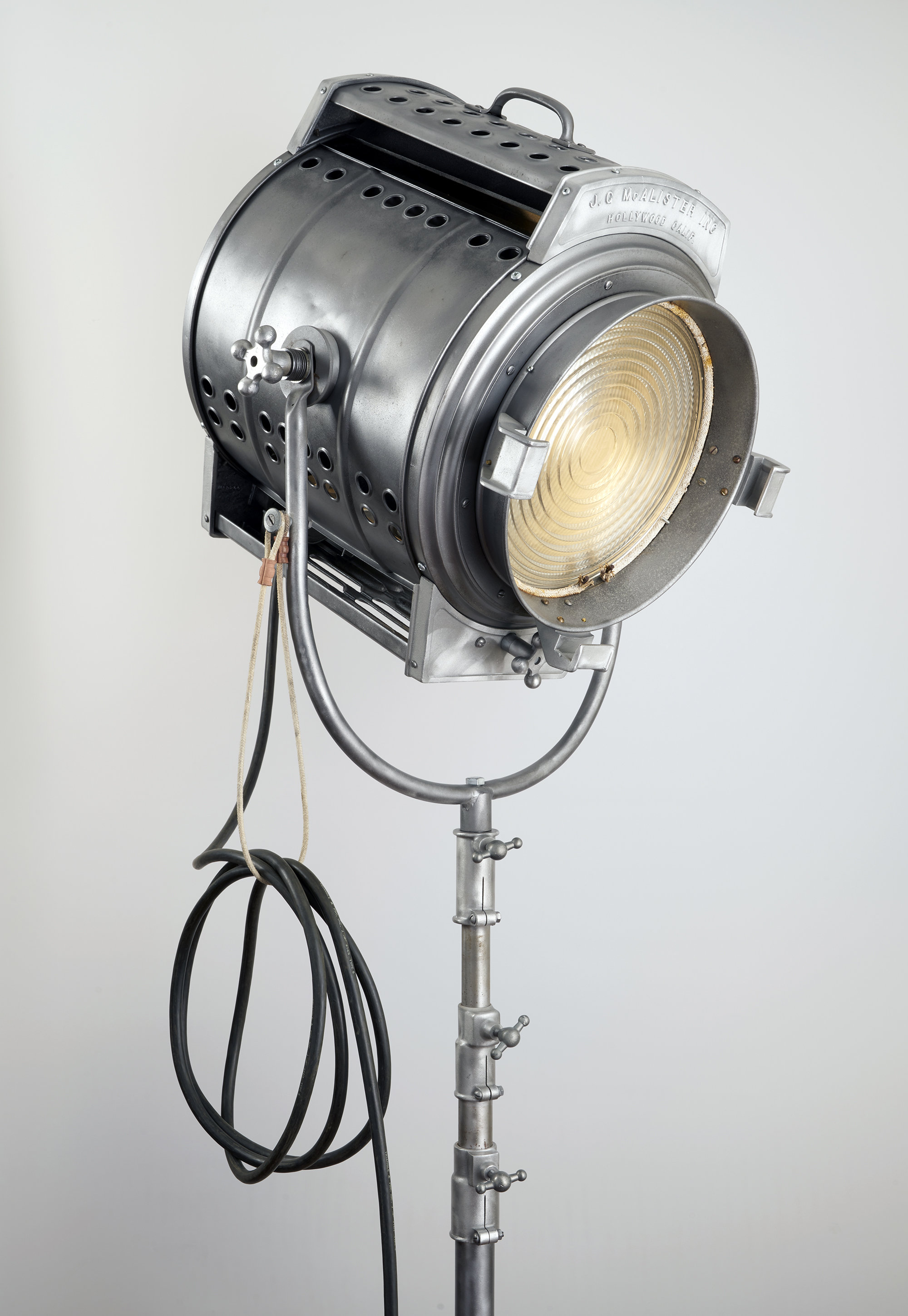 * International shipping on these oversized lights is now available. Message us for a quote, as the Etsy shipping module doesn't support packages of this size and weight.

Personal Notes:
Heavy Metal: our classic signature look, sandblasted then buffed with wire brushes, next aged to perfection with metallic rubs. I cannot even begin to explain how COOL this light is, and BIG, Really BIG! This light clocks in at 56 lbs, with the stand being another 38lbs.

WARNING - Initial setup may be difficult due to the weight and size of this unit; I would suggest it be done by two people to be safe. Not a toy, a real working Hollywood professional move light (advice available if required). After the initial setup, the light rolls around and adjusts easily!

Bardwell & McAlister
(B & M Lighting) has been in the business of manufacturing motion picture lighting and production equipment since 1926. Although the company has changed hands several times throughout the years B&M has always maintained the respect of professional filmmakers, providing television and major motion picture studios with quality products and services. During the 1940′s B & M had over 200 employees in five separate plants here in southern California and published its own in-house newspaper called the Spotlight. B&M dedicated three of those facilities to producing bomb loaders and other military equipment for the war effort based upon the design of their camera dolly and other production products.

“But for purists like John Scarpati, a Virginia photographer who restores and sells these lights in small batches, the only way to showcase them is in their original form – dents and all. “I still disassemble every part and do a complete off-frame restoration; I just don’t over-polish,” he says. “These lights exude an unparalleled sense of aesthetics.” His collection consists mainly of Hollywood classics: Mole-Richardson, Otto K Olesen, and Bardwell & McAlister, whose imposing keg lights with metal roller stands and 6in Fresnel lenses are particularly sought-after.”
- Financial Times

“American photographer John Scarpati has taken to scouring old Hollywood studio supply warehouses in search of restoration-worthy examples. made between the 1920s and 1940s, each light is a one-of-a-kind original, complete with a vintage stand or tripod. they exude the sort of patina that can’t be matched by cheaply mass-produced repros, yet ironically, the lights in his Etsy shop actually cost less than the replicas available in upscale malls. ‘my personal favorite finish is a heavy, industrial, vibe, explains scarpati. completely refurbished, but still keeping its vintage look intact. less of a polished finished and the more real deal.’”
- Designboom

“Restoring these old beauties is definitely a labor of love for Scarpati. After tracking down one or two of these rare creatures stashed in a forgotten corner of some cavernous L.A. warehouse — a feat in itself — he gets them to his personal workshop, where he completely breaks down each to its individual parts. Every knob, lens, and metal component is cleaned, stripped, and refinished, with impossibly rare missing parts found and fitted. Often, lamps and stands are discovered separately. Scarpati is a stickler for detail, so he actually insists on matching every light to a stand made by the same manufacturer. New wiring, a fresh bulb suitable for home use, and you’re good to go. If by now you’re realizing that all this entails a tremendous amount of sleuthery and hard work, you are correct. Occasionally, the internet will offer up a similar example of industrial hardware from Hollywood’s golden age. But nobody, nobody, even comes close to this level of restoration.”
- Royal Circus

“Vintage Hollywood lights re-purposed as modern works of art. Over the three decades music photographer John Scarpati’s lens has chronicled rock, metal, and punk acts including Poison, Circle Jerks, Social Distortion, New York Dolls, and Rush.  Scarpati has most recently taken to scouring old Hollywood studio supply warehouses in search of restoration-worthy lights to restore for domestic use. The lights were usually made between the 1920s and 1940s, each is a one-of-a-kind original, complete with a vintage stand or tripod. They exude the sort of patina that can’t be matched by mass-produced reproductions.”
- the/HeaveyCurrent